As the wedge is driven in, the end of the shaft will expand to fill the eye of the hammer completely. The wedge can now be cut off as shown, and finally driven in until level with the end of the shaft. Finally, a metal wedge should be made and fitted to secure the head firmly on to the shaft. The drawings show the stages.

The barbs which stop the wedge from working loose are cut using a hot chisel. Drive the metal wedge in at right angles to the wooden wedge as shown. The ball-peen hammer A ball-peen hammer is made in almost exactly the same way as the cross-peen hammer. The only difference is in the first few stages. The finished hammer should look like this.

Cut most of the way through the claw using a steep-sided hot chisel. Using a piece of mild steel sheet to protect the face of the anvil, finish splitting the claw using a normal hot chisel. Gently open out the claw of the hammer using a hot set. The claw should now look like this.

From this stage onwards the process is almost the same as has been described under the section on making a cross-peen hammer. There are, however, three differences. This should prevent them from breaking off during use. Using mild steel, follow the instructions for making a hammer as laid down in the previous pages until you reach the section on hardening and tempering. Using a hot set cut a piece of leaf spring to the same size and shape as the face of the hammer. This is best done in two stages: first, cutting out a square, and then removing the corners. The finished piece should look like this.

Sprinkle a little clean river sand between the two pieces of steel. The sand will melt and act as a flux as the two pieces heat up. Bring the hammer head back up to welding heat and weld on the face using firm rapid blows, starting from the centre and working outwards until the whole face is welded on.

Hot flux and slag will be driven out as the weld is performed, so make sure that nobody is in danger of being burned by it. Heat the hammer up to red heat and anneal in ashes. With a file clean the sides and face of the hammer head and remove any sharp edges from around the face. The hammer face can be hardened and tempered using the techniques described on pages 60 - The peen, being of mild steel, cannot be hardened and therefore need not be quenched.

Basic blacksmithing: an introduction to toolmaking with locally available materials.

The designs chosen are based upon those seen by the authors in Zimbabwe and Malawi. Designs of products vary from country to country and even between regions within a country. The following instruc- tions should therefore not be used as a fixed set of rules, but rather as a guide to techniques. Axe-making Most blacksmiths find that there is a demand for axes.

The following pages will show you how to make an axe head from start to finish. They will also show how you can save fuel and time by making several items at once. Axes should be made from high-carbon steel. Used vehicle leaf springs are ideal. The width and the thickness of the metal chosen, and the lengths of the pieces cut off, will depend upon the weight and size of axes wanted.

Heat up a length of leaf spring and, using a hot set or chisel, cut a little over halfway through the metal as shown. When broken off this piece will provide the metal for two axes. Heat the metal up further along so that a second piece the same size can be cut. 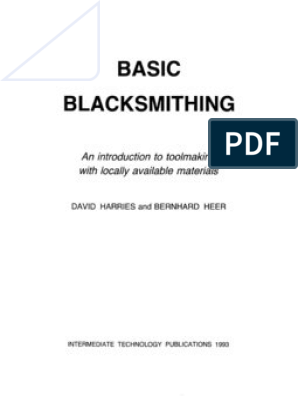 Using the hot set, make the second cut. Where the first cut was made the metal should now have cooled enough to be broken off. To do this, turn the metal over, lay it along the anvil and give it a few sharp blows with the hand hammer.

The metal at the second cut line can now be bent slightly and the process repeated until the whole leaf has been cut up. When making a large quantity of axes it will save fuel and time if metal is stacked up in the fire. A small amount of fuel should be put between the layers of metal.

Always take the bottom piece of metal from the fire as this will be the hottest. When the bottom piece has reached forging temperature remove it from the fire and using a hot set cut a little over halfway through as shown. The cut should start at one corner and go about halfway towards the opposite corner. Turn the metal on its side and strike the edge a few times with the sledgehammer. This will bend the metal along the cut line. Turn the metal round in the tongs and continue the cut from the centre to the other comer.

Once again turn the metal on its edge and give it a few blows with the sledgehammer.

A bigger piece should be cut from the longer side. The axe head should now look like this.


Holding the metal in a pair of tongs, carefully quench the corners of the axe head as shown and break them off along the cut line with a few blows of the hand hammer. The first axe head should now look like this. All the axe heads should now be brought to this stage, returning each one in turn to the top of the pile ready to heat up for the next stage. As the blade is drawn down it will start to spread out sideways.

If you wish to produce an axe with a straight edge you should turn the axe on its side and forge the sides back in. Before the blade becomes too thin it should be rounded off with gentle blows of the hand hammer. At the end of this stage each piece should be turned round and returned to the top of the pile of axes in the fire so that the other end of the axe head will heat up. Each piece of metal should be worked on in turn, always starting with the bottom piece. The tang is drawn down by forging in the sides of the axe until the correct width is reached and then drawing down the tip to a square point.

The drawing on the left shows an axe with the sides forged flat. The right-hand drawing shows one where the sides of the blade have been allowed to spread out. Axes can be hardened and tempered to help them stay sharp for longer. 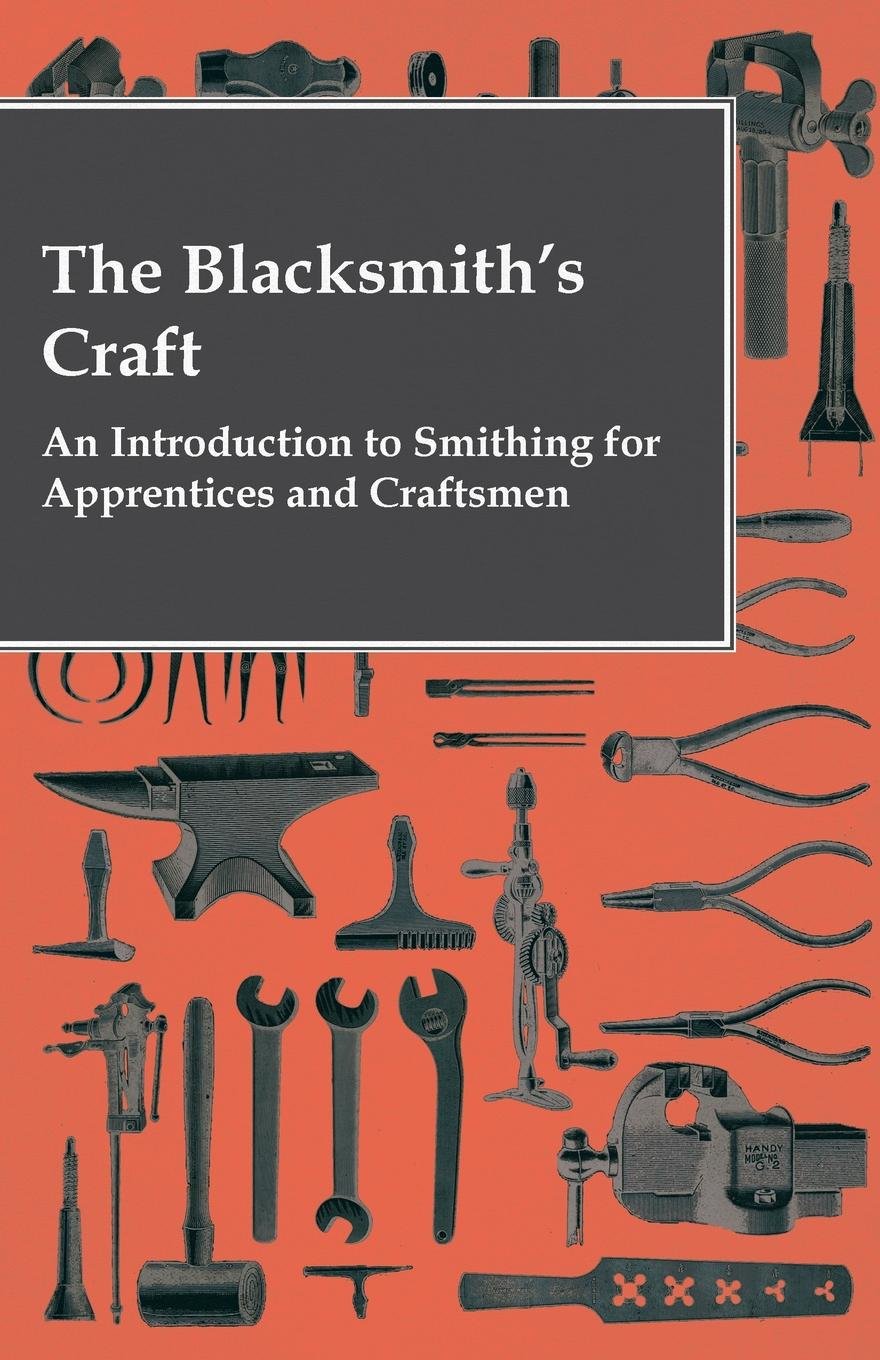 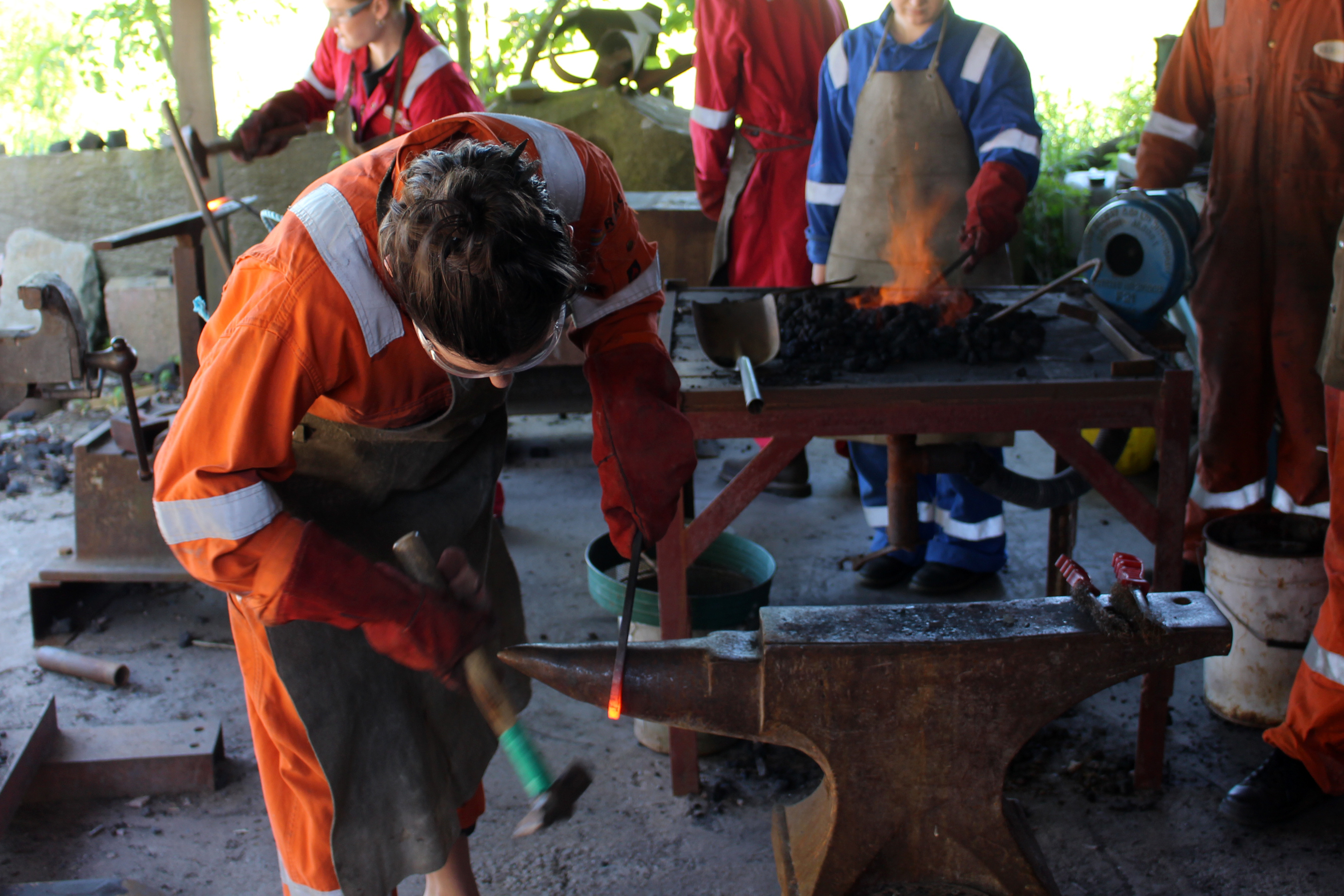 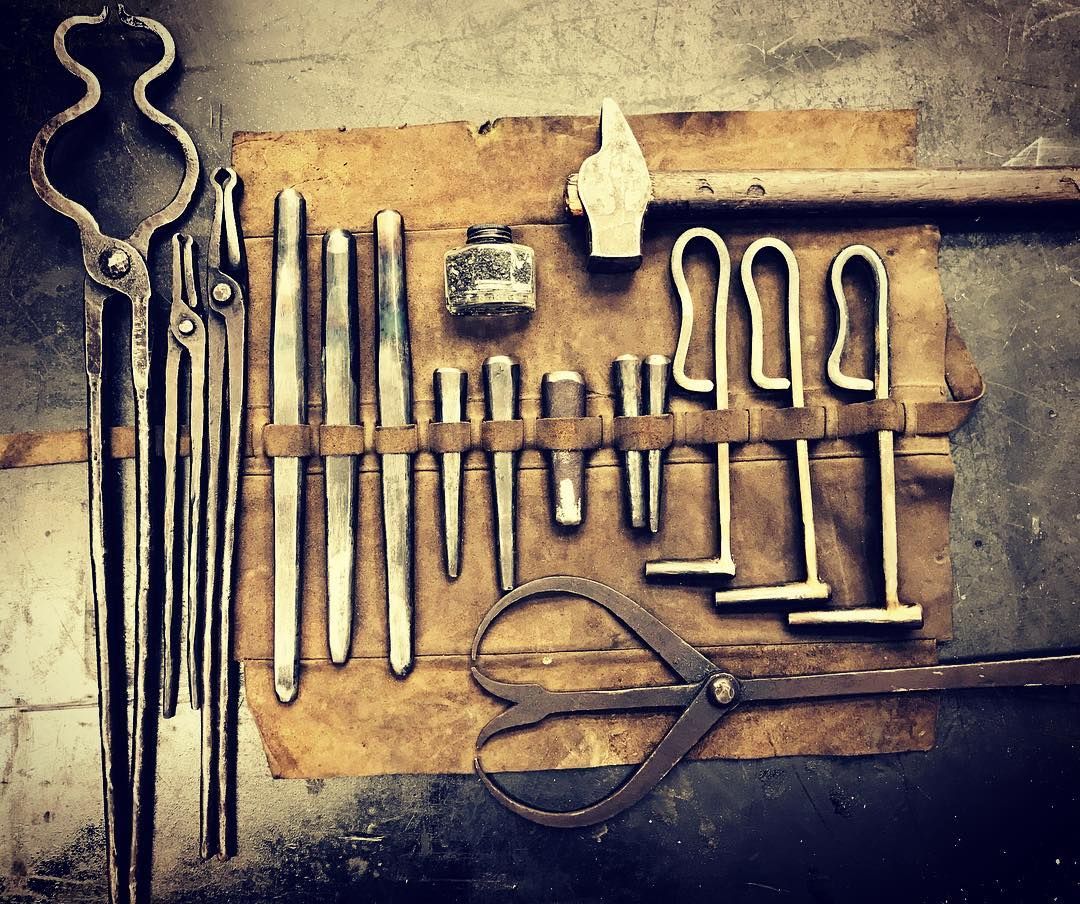 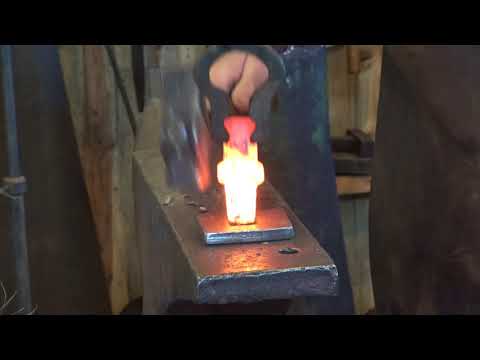